It is that time of year again!

Online Registration is now open for Coolest Projects International 2019 in the RDS Dublin next May. Parents/Guardians will need to login with their CoderDojo account details to register and complete the proposed project details.

The event takes place in the RDS Main Hall, Dublin, on the 5th of May 2019.
Unfortunately, that Saturday is also the start of the May Bank Holiday weekend so check your calendar.
This is also the shortest project preparation period since the event began so decide what you or your group want to submit. Then submit the project outline as soon as possible, you can always change it later.

Entrants can submit projects previously entered in other educational events.
Only one project can be entered by a ninja or group.
Check out the rest of the Rules and Regulations, they are straight forward and easy to read.

Admission is free and it is always a great family day out. 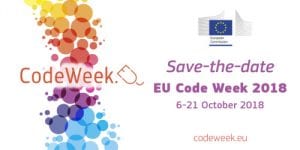 We decided to to have EU Code Week in our dojo this week. Our mentor brought some new ideas back from MegaDojo 2018 in Maynooth last Saturday. We put otheBBC micro:bits we received from DoderDojo HQ to the test.

We checked out all the built-in sensors and carried out a few simple tasks using a tiny bit of code. 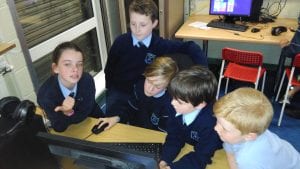 A few simple lines of code and we could get the micro:bit to read the room temperature and light level. 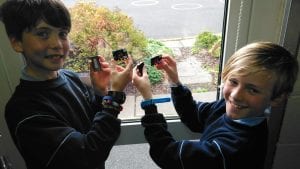 The light reading changed to 248 at the door and 93 under the workststion. The temperature dropped by 3 degrees at the door.

It was great fun! Did you know you can make a simple FitBit with a BBC micro:bit?

It was very noisy at the dojo today. Everyone was excited because we tried something new. It turned into a race  with some groups but they made lots of mistakes. My group took our time. 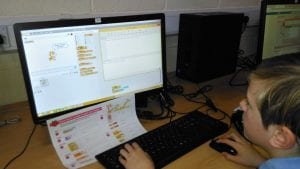 Interesting! So far, so good. 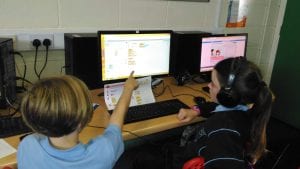 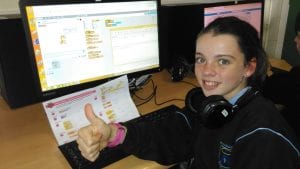 It is European Code Week 2018 and some of us in the dojo are going to try to move from Scratch to Python. First we had to download MU from the internet. MU is a really simple Python editor for beginner coders. The Raspberry Pi group go about things slightly different but it works the same.

Our mentor handed gave each group a cheat sheet  to make things a bit easier. The biggest delay was the MU download because everyone was doing it at the same time. Our mentor said he will have MU on a USB key for the next dojo.

Python is very tricky because if you forget to hold down the SHIFT key you get a ; instead of : and then you get an error.  My coding buddy spotted the mistake.

Typing in text for Python is very sloooooow. Scratch is fast! 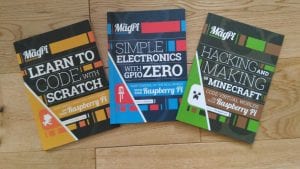 If you want to buy or borrow a book during the summer holidays check out any of the above titles. They cost less than a take away meal.

Alternatively, the PDF file can be downloaded free of charge at https://www.raspberrypi.org/magpi/issues/ The full list of all the MagPi Magazine editions and the “Essential” publications are available at this location.

“Simple Electronics with GPIO Zero” is an easy to read step by step guide to the GPIO Zero python library. If you wan.t to go straight to the source click on the following link https://gpiozero.readthedocs.io/en/stable/recipes.html

Enjoy the rest of the holidays.